2009 AD, also remembered by some as the international year of astronomy,
opened with a nice surprise for the project.
On January 13, exactly four years ago, the BuioMetria Partecipativa initiative appeared for the first time on the press. No less that the italian edition of the Mickey Mouse magazine, and no less than with a special report on “the darkness hunters”…Francesco stands out as a real star the story.
If you read the magazine, after the report there was also a story completely “in the dark” (all the comic strips are black except for the dialogue baloons). However I don recall if there was some relation to our initiative.

Since once piece of news easily generates another one, the story of “the darkness hunter” was then covered just a few days afters by the Corriere Fiorentino (the Florence edition of Corriere della Sera, one of the main national newspapers). 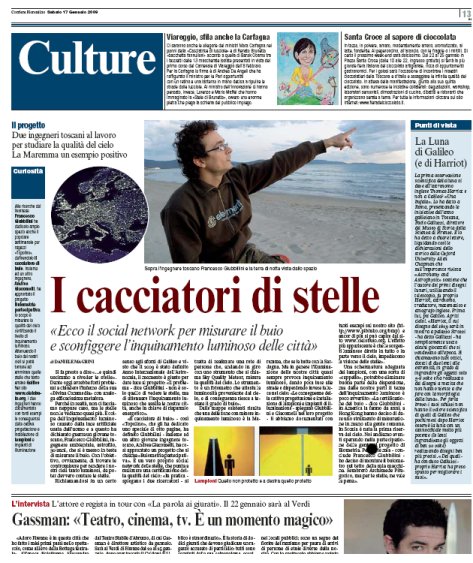 Apart from the pride of seeing us on the press (in a positive piece of news, and on the same page with Alessandro Gassman, a famous Italian actor), we didn’t really know what to think of potential reactions by the readers…anyway: it worked: a few days after the Mickey Mouse issue, we were contacted by Paola, a primary school teacher in the Marche region. She was interested in some input by us on light pollution. This was the trigger for us to start thinking to a new type of audience: kids.
Until that moment, we hadn’t been really thinking of an audience: the sky quality meter had been passed to a friend who took measurements walking the dog, and similar cases…now we were getting ready to face the masses