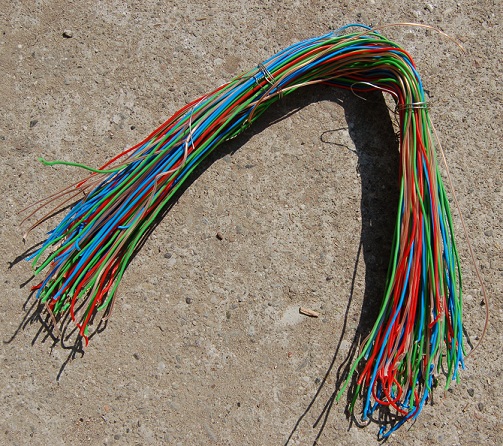 We started October 2008 in a peculiar state of high energy.

We were riding the mounting wave of fusion -or, according to some, confusion- between culture, environment and free/open information which we launched in Ribolla three months earlier.

We felt ready for (almost) anything in the quest for synergies, liaisons, and pieces of string.

Anything which could resemble a sensible thread, or at least, a thread more sensible that then one exposed in Ribolla. If we were crazy, we were trying to get wiser. Climbing unknown mountain paths at night was no longer an option.

To help in our guided path towards a meaning, Claudia and Federico at L’Altro lato, the national radio show which “launched” us in coincidence with the Ribolla event, invited us as main guests in another episode of their show.

This was our first opportunity to enter the gates in Corso Sempione 20 [note: the RAI Radiotelevisione Italiana offices in Milano] for our live show. This was not my first live radio experience (I had other occasions back in 2005, finding myself rather at home).

The one issue was that neither of us was in the brightest shape, for different family reasons. During one of the breaks, while Federico was interviewing other guests over the phone, Claudia told us, with her bolognese accent: “C’mon guys! remember that Radio Due is an entertainment radio…a little more energy, please!“.

At the end of the day, the pace of the show was a little affected by our conditions…no slapstick comedy…but we eventually had other opportunities to recover our entertainment side.

Talking about synergies, we spotted a cool opportunity for October 25, 2008. For that date we observed an interesting “astronomilca conjunction”. In fact, the calendar showed both the Linux Day (a national event on free/open information, which was easy for me because the year before I was following this with my GFOSS.it hat),and a “national” day against light pollution.

We contacted the organizers of both events, and it turned out that we could have a talk at the Linux Day in Grosseto [Note: the main city close to our operations back then]. We proposed a talk called “M(‘)appare la Maremma”, recalling something like the M(‘)appare Milano from Spring 2008. Furthermore, Francesco would have had space to talk about BuioMetria Partecipativa, and this presentation would have been “under the auspices of” the “national” day against light pollution.

In parallel to the preparation of the talk, we spent a non-neglectable amount of evenings before the event to plan a rural route in the Grosseto surroundings, in order to take some measurements.

We had expressions of interest by around five locations, including some farms and some friends of friends. These locations were ranging from Campagnatico, to Magliano and some other place further South. I don’t have this very fresh, but I remember using a printout from the Regione Toscana mapping service to jot down the planned points with a red pen.

The plan was looking great: the presentation around 5PM, some aperitivo to follow, and then off, to take as many measures as we could!

The presentation went fairly well. I would say meeting my expectations for a Linux Day. Maybe an element which may be easily improved in “grassroots events on innovative things related to very high causes” is that there should be LESS presentations, so that the a general audience may be more focused on less things. When I will decide to organize my own Linux Day, I will try to do something about this.

Also, when I will decide to organize a daily event with some relation to light pollution, I think I will keep in due consideration the other event with which, naively, we tried to collaborate. Let’s say that, as a minimum, we will first ask what our counterparts

mean by “under the auspices of” some organization. But this is another story and we will get back on this in some ten episodes!

After the talk, we came to our aperitivo: Francesco, a friend of Francesco’s joined us, together with a young farmer by the name of Alessandro, who came down from the hills to follow our talk.

Following Murphy’s Law, in the meantime, together with Alessandro and Francesco we had clouds coming as well.

This was to become one of the standard of various events to follow: with cloud cover, it is impossible to collect night sky quality data. This is what they told us, back then. Then, about a year ago, a Canadian-German guy wrote a scientific paper showing that it is very intersting to collect measurements ALSO with clouds, because these “amplify” the effect of light direct upwards, but -back then- we weren’t quite aware of the issue.

As we were approaching the end of our aperitivo, we had to take a so called “business decision”: to “go” or to “no go” with our measurement tour, considering the cloud cover ? Would the wind blow them away, together with the answer by Bob Dylan, my friend, or would they stay and lead to the cancellation of the field trip ?

We needed a secound round of drinks to consider the options, and we went for the conservative one: we cancelled the tour. One of the reasons was that this would have required at least 100 km of travel, and driving the whole night to see how nice clouds are was not a need for the project.

We then decided that we deserved some consolation, after the cancellation, so we aimed a renown agriturismo for dinner, half way between Grosseto and the sea. And cosolation we had: very substantial quantities, and very notable quality (this is said by someone who has very frequent opportunities of tasting very good Tuscan cuisine).

After the dinner, Francesco headed North, back home, and I drove towards Scansano, where I was to spend the night.
Just after the bridg on the Ombrone river, as the road started winding up towards the hills now famous for the Morellino wine, an e-x-t-r-e-m-e-l-y c-l-e-a-r sky was confronting me.

The clouds had vanished, or the were just never on that side of the province. Had we decided to exit Grosseto heading East instead of West, would we have seen a different story ?

So I managed to take a series of measurements, along a track which is more or less in area marked in yellow. 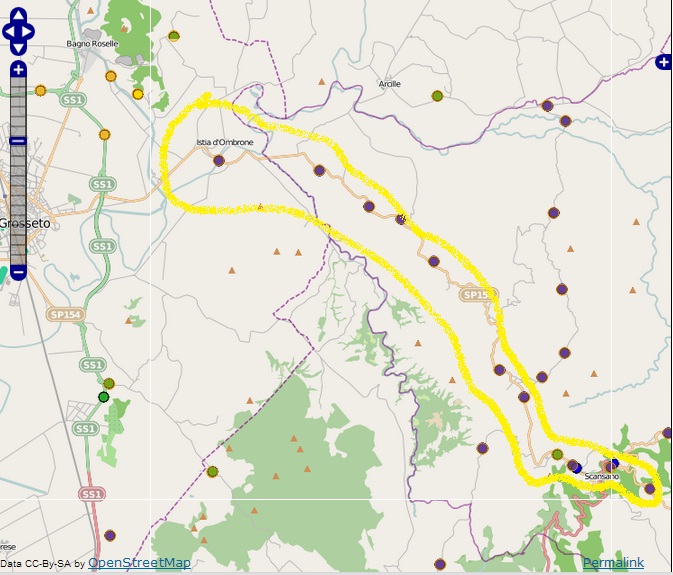 The day after the event, I found myself to be part of the “olive picking” ritual, with a tribe of hunters-gatherers from the Albegna Valley. In the next picture, you can see one of the members of the tribe at work: 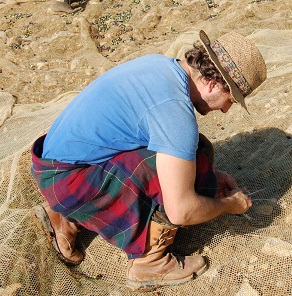