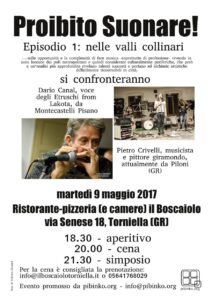 This was a day with multiple musical nuances. Dario Canal from Etruschi from Lakota arrived around 1PM (after his musical induction classes in the morning). Incidentally, our second guest, Pietro Crivelli, showed up in the main square in Torniella around noon and stated playing fingerpicking guitar for twenty minutes, creating a cool mood, with notes floating in the air.

During the afternoon we had the opportunity of interacting with other residents.

The public official part of the program started at 6.30PM. Attendees included some Farma Valley residents, and delegations from  Chibumba (an all-acoustic band from Grosseto) and from the farming-musician community in Tatti, a nearby hamlet. After a quick dinner at the  Boscaiolo, the second part of the event took part in the Tornella music hall.

The hall is normally used for rehearsals of the Band of Torniella, in addition to parties and celebrations for special occasions in the village, but for a couple of hours it turned into a forum where the two guests debated on key issues for musicians, such as self-produced records, or the opportunities deriving from crowdfunding platforms (by the way: check out the musicraiser campaign for the publication of the third Etruschi from Lakota album). Summing all the issues emerged in discussione from lunchtime onwards, we surely improved our insight on the idea of “producing and performing music in a rural area”. 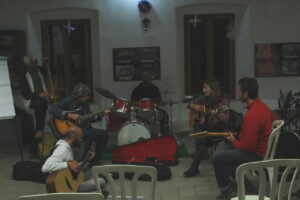 At the end of the discussion we also had some 20 minutes for casual jamming, involving audience and hosts mingling with different sets and using instruments casually present on locations, from different sources…or were the proportions between the talking and the playing opposite? Can’t remember right now!

Stay tuned on the pibinko.org calendar or subscribe to our mailing list to receive weekly updates on initiatives and events unfolding during the coming months in the Farma Valley or in other locations where we collaborate.

Kudos to those who provided a special support for the success of the event: Claudio and Fabiano Spinosi, Mario Straccali, Andrea Bartalucci, and Wolfgang Scheibe.