This is the translation of an article published on page 23 (Culture) of Il Tirreno on Dec. 17, 2016. Il Tirreno is one of the two main newspapers published in Tuscany (the other one being La Nazione). This article was requested as a sidebar post to the main article about the Farma Valley Winter Fest by Giovanna Mezzana.

Andrea Giacomelli, creator and founder of Attivarti.org, explains how the three-day event hosted by the Farma Valley was born

by ANDREA GIACOMELLI*,  MS in Environmental Engineering, PhD in Hydrology 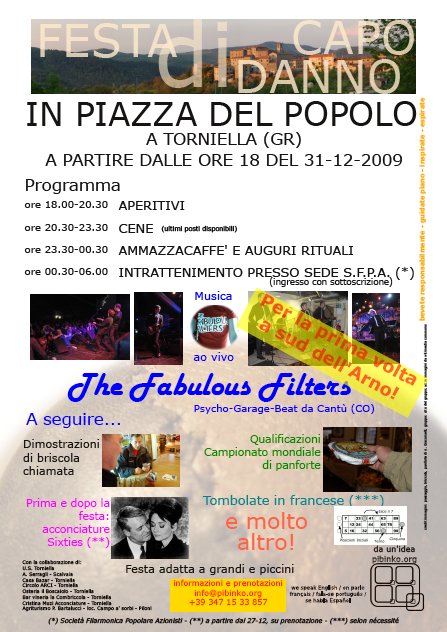 A three-day event with a foundation of music and pillars of science and culture is an idea we were thinking about since 2010. This was the time of the first New Year’s Eve party in Piazza del Popolo.
Back then we hired a psycho-garage-beat band to commemorate three years of stories, which had started with the Palla a 21 in Chicago project, and to give a meaning to a turning point in a journey which is continuing since then. In addition to several residents, some forty people from out of Tuscany attended: these were not just fans of the band, but also people who were following our initiatives and was curious of getting to know our base camp.

Once the group had left, the first question by Antonella Pocci, who was at the time the owner of the bar la Combriccola in Torniella, was: «When are we re-doing this?». The answer was the idea of a three-day festival, to be called Bosco Riserva. This name on one side represented the intentional mis-translation of the word Woodstock, and on the other side hinted to the vastness of the woodlands in the Farma Valley, and to the natural reserves it hosts. Once the project was written, we just needed to find the right opportunity to perform it.

The conditions appeared three weeks ago. We found ourselves with: a birthday party shifted by two weeks to wait the arrival of a colleague who could not miss the event; the lack of a secretary for Etruschi from Lakota, so that a date originally set for Dec. 17 needs to be moved to Dec. 18 because Simone Sandrucci [lead guitar]forgot about his students’ end-of-year performance in Pontedera; the urge to go live by some folks in Chiusdino (but with a keyboard player from Torniella); an evening scheduled with a photography association in Grosseto, which always proposes events on Mondays; a draft map compiled by Enzo Panerati from Torniella and Paola Bartalucci from Piloni, laying there since months, which we wanted to share with folks from the villages more or less during Christmas time.

In case of rain, the Valley has premises to host a group of friends, so we said: «This looks like our festival». Some see in this a line of serendipity, others an upstream journey going on for ten years and counting. It would be really interesting to know what you think about the case: write to mappare@attivarti.org, and the most original answer will receive a gift from “the Valley that’s not there”.