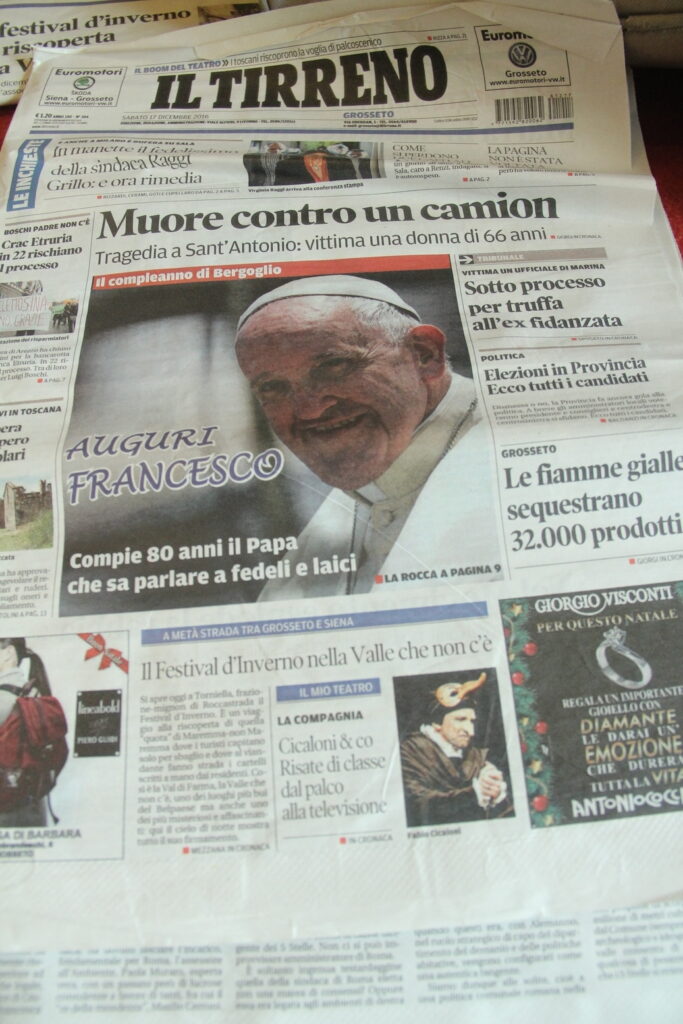 The Farma Valley Winter Fest was launched by Il Tirreno (one of the two newspapers published in Tuscany) on page 1, with a clip inviting people to read the article on page 23 (Culture). The translation of the full article is provided below, with some added hyperlinks and notes to provide some context to the reader.

As a sidebar item, I was invited to write a short article explaining how the Festival was conceived. This article is also on the same page, and an English translation is provided in a separate blog post.

“Between the Farma and the firmament”

Half way between Grosseto and Siena, in the hamlet of Torniella, the Winter Festival about mapp(ear)ing – by Giovanna Mezzana

GROSSETO. Saturday, Dec. 17, 2016 a Winter Fest is starting in the “Valley that’s not there“. This may be found, provided you have the right map. The key is m(’)appare [an Italian neologism created by the pibinko in 2008, combining mapping and beholding], i.e. to look with an eye going beyond geographic, social or cultural conventions. The Valley that’s not there is the Farma Valley, which is no more in the province of Siena, but not quite yet in Maremma.

If you take a map of Tuscany and you draw a line joining Grosseto to Siena, half way you will find Torniella. This is a tiny hamlet, part of the municipality of Roccastrada. It all starts from here. The first reunion is today, but the Festival will continue tomorrow and Monday in Piazza del Popolo. The main premises for the festival are the Torniella Band headquarters, because in this event musicians provides a soundtrack, but also significant organizational support.
WHERE IS IT. One life ago, travellers could reach these places by following the old State Road connecting Arezzo to Siena and proceeding South to Grosseto. Nowadays [following the opening of the new state road in 1974, which bypasses the hamlets] tourists come here by accident.

Besides: why delve in this desolate moor, where orientation is provided by hand-painted signs made by residents, when close by you have San Gimignano? Still, somebody decided to hold in this spot, and in full Winter, a festival. All the events unwind between  Torniella, Piloni, and Scalvaia – three hamlets where hunting and ancient traditions have not been lost. These settlements all lie in the range of a few kilometers, but the Valley covers approximately 120 square kilometers.

THE FESTIVAL. There will be three days of live music, with five sets including a concert by Etruschi from Lakota (Sunday, Dec. 18); hiking around the valley, and meals with local delicacies. The closing of the festival will be an evening lecture on photography, on Monday Dec. 19 in Grosseto. Hosted by the Riflessi Photo Club there will be a presentation on “40 anni of shooting environment and territory”, i.e.  “m(’)appare” Maurizio Bacci.

In addition, the festival will have more presentations and ceremonies a little out of the box. For instance, on Sunday Dec. 18, at 10PM, in Torniella you will find the handover of the dark sky meters. Wanna monitor some dark skies? You couldn’t find a better place: the Valley that’s not there is one of the darkest locations in Bella Italia, or -if you prefer- the place where the sky reveals all of its firmament given the very low levels of light pollution compared to other locations.

For more information, you may visit www.attivarti.org, the site of the association promoting the three-day event, and check out the Farma Valley Winter Fest section. Reservations can be made on +39 351 133 7020, or you may write to mappare@attivarti.org. This also applies in the case that you may not be able to attend, but are interested to past and future activities of this type.
BEHIND THE SCENES. The three-day event is a birthday party. It celebrates ten years of activities by a team active since 2006, whose non-profit operations have converged into Attivarti.org, aka the m(‘)appare association, created in 2011 in Torniella. The creator and founder of the association is an environmental engineer with a PhD in hydrology: Andrea Giacomelli.

Let us rewind the tape: in 2006 Andrea Giacomelli has an idea spinning in his mind: to bring to Chicago, Illinois, the game of Palla a 21 (or palla eh!), an ancient game still played in the hills South of Siena and in the northern fringes of the Tuscan Maremma. He calls his uncle, Augusto Cerreti -from Torniella- and asks him to help him to set up a team. On January 4, 2007, at La Combriccola (the bar in Torniella), we find: Mario Straccali, electrician at Lucchini in Piombino, Claudio Spinosi aka Bob, construction guy, both from Torniella. We then have Alessio Serragli, 25,  anni, surveyor from Scalvaia; Andrea Bartalucci, the bartender, from Piloni. And Palla 21 will eventually land in the US of A.

This is the model of all activities by Attivarti.org è questo: the expertise of engineers, ICT specialist, geographers, and archaeologists merge with traditional knowledge and local heritage, in this case from the three Farma Valley hamlets. The result is amazing.

M(’)APPARE. The association has created and distributed digital content, photo exhibitions, citizen science campaigns,  ottava rima workshops, and coverage of events. This is how it investigates with an “alternative” eye the dynamics of areas unknown to most, and it promotes their cultural and environmental assets.  It recognizes the “breath” of a place, somebody might say its Genius loci.

An example? At 9PM, on Sunday Dec. 18, in Torniella there will be the presentation of the Farma Valley community map. The official cartography of the area has been given to hunters and mushroom seekers of the Valley, who have been asked to integrate the maps. This has led to a bottom-up mapping exercise, where place names which were precisely known just by a handful of people are now documented and available to all the community and future visitors of the Valley.