In July I took part in the first meeting of the participatory process of the Grosseto Municipality for the definition of proposal for the use of the 400000 Euro deriving from the “tourist tax” (i.e. the small quota payed by tourists when they stay in Grosseto tourism facilities).

I published a summary of this event onAttivarti.org, since a strong interest was demonstrated for the BuioMetria Partecipativa project.

Having followed the first meeting in Roselle, I was re-invited in Roselle on Sep. 29 from 5PM to 7PM. 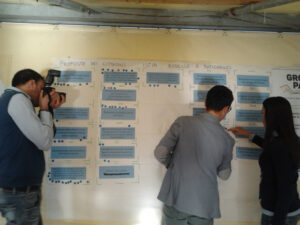 Phase two of the process consisted in a first screening of the ideas collected in July, narrowing down the bunch of to three ideas using four coloured stickers for each participat to express a preference. Each of the three “leading” ideas was assigned to a “preliminary design” table, and the participants were invited to join one of the tables to further discuss the idea.

BuioMetria Partecipativa received only two preferences in this step. Considering the context and looking at it on the bright side, I might say it was a success to even have one preference in addition to myself! But -like in all the fairy tales- I was distracted at some point and did not take note of who was the other BMP supporter.

To follow the rules of the game I thus parked the “night sky issue” and decided to join the table of the idea ranked as #2 (or #3, I don’t remember), i.e. the planning of a series of cultura events in the suburbs of Grosseto. 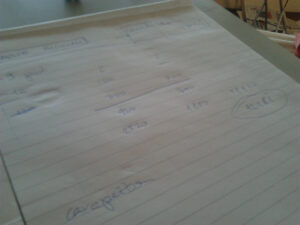 Here is my proposal in a nutshell:

Rough estimate on a first pass of calculations: 42768 Euro (to be tuned).

Other points of interest I found