Yeserday I had the onus and bonus of having the first talk at the opening ceremony of the Ninth Parco Nord Milano Biodiversity Festival.

I spent some twenty years of my life in Milano, in various phases, and I’ve been roaming in the city quite a lot, not to mention the m(‘)appare project.
Now that I am spending more time in hamlets on the Tuscan hills, than in urban sprawls, I’m starting to lose my bearings.
I was confusing the old tobacco factory with the building at the Viale Zara/viale Marche intersection, so I thought I could walk from the bus 90 stop in viale Zara. After 30 seconds I considered asking  three bus drivers who were having a smoke between shifts. They kindly explained that my destination was in fact two miles, rather than 200 yards, away, and invited my to take the new Lilac metro line.

I finally found the museum. After some greetings, the event started with the institutional remarks by the Park Management and the mayors of the three municipalities related to the park (Cormano, Bresso, and Sesto S. Giovanni). Then we were off with the expert talks.

I spoke about “measuring night sky quality, and sharing its value“, which in Italian could be also said as “BuioMetria Partecipativa”, but sound a bit more institutional.

In addition to the usual bird’s eye view on light, night sky, and citizen science activities, yesterday was a good opportunity to share the case of lighting revamping in Milano, with the quasi-instantaneous transition to LED in most of the city, driven by the EXPO works. This case is very well shown from International Space Station imagery, and was recently advertised by Alejandro Sanchez, an astronmer with whom we collaborate in the Loss of the Night Network. From the Loss of the Night Network I also recalled the recent recommendations about the use of light at night , with a focus on direction, blue componet of light, colour temperature, and illuminance levels. 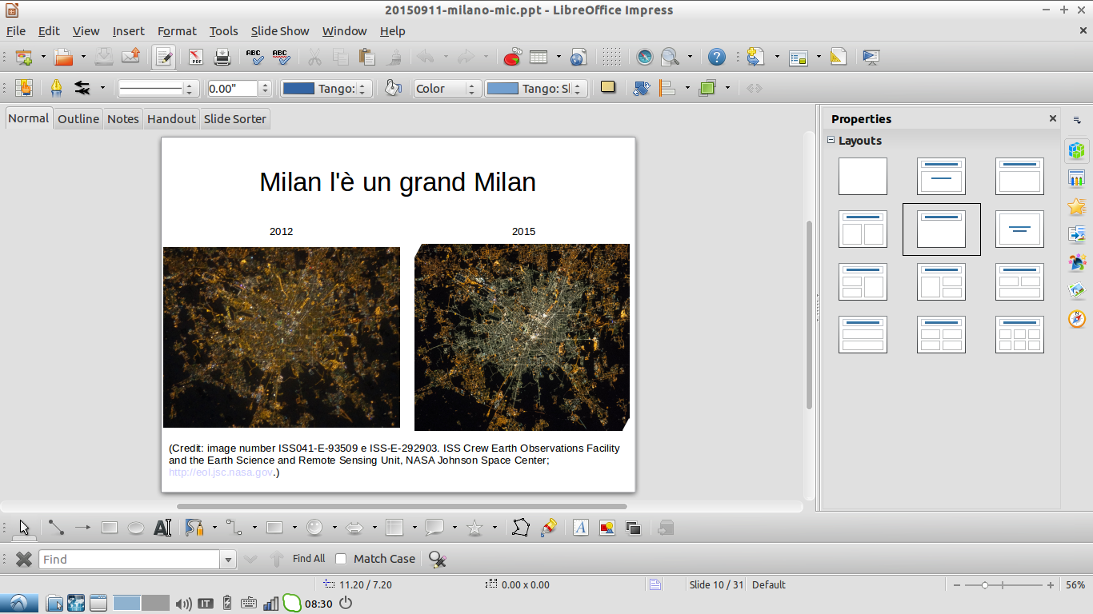 The session was moderated by Marina Carpineti and Mario Zannoni, University of Milano.

It was a pleasant afternoon, where I learned some new things, refreshed some old ones, and provided some insight to others on the topice I was presenting.
The closing was with an aperitivo based on “wilderness food”. A very, very milanese situation ;)

After the aperitivo, the Museum was showing “Il ragazzo invisibile”. However I was up and about since the break of dawn and with no siesta. Considering two heavy days ahead at Parco Nord, for the BuioMetria Partecipativa demonstrations, I considered making my way back to base camp, not without taking a stroll at l’Isola, where all the story started in 2006.

Waiting for the official photo coverage, here is a shot with the Mayor of Cormano greeting the audience with the backdrop of the last slide of my presentation, with the acknowledgments, the map of night sky quality, contact information, a panoramic view of the Farma Valley and the pointing arrow saying “we are here”. 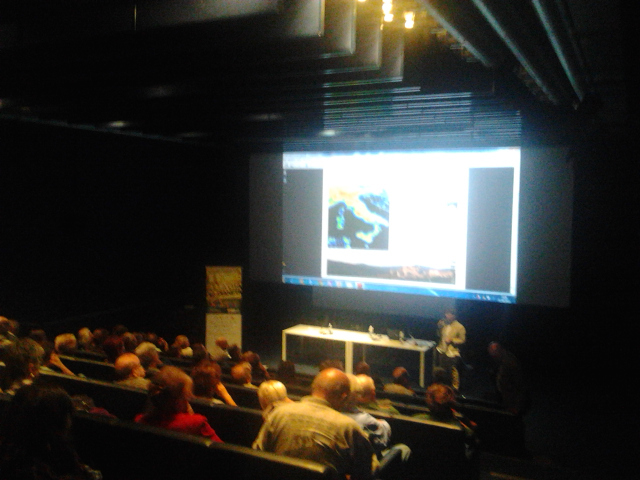