Below is the translation of a press release issued by the German Ministry of Environment on June 20, 2018 (original source here). From the BuioMetria Partecipativa project, it is important that this news circulates. 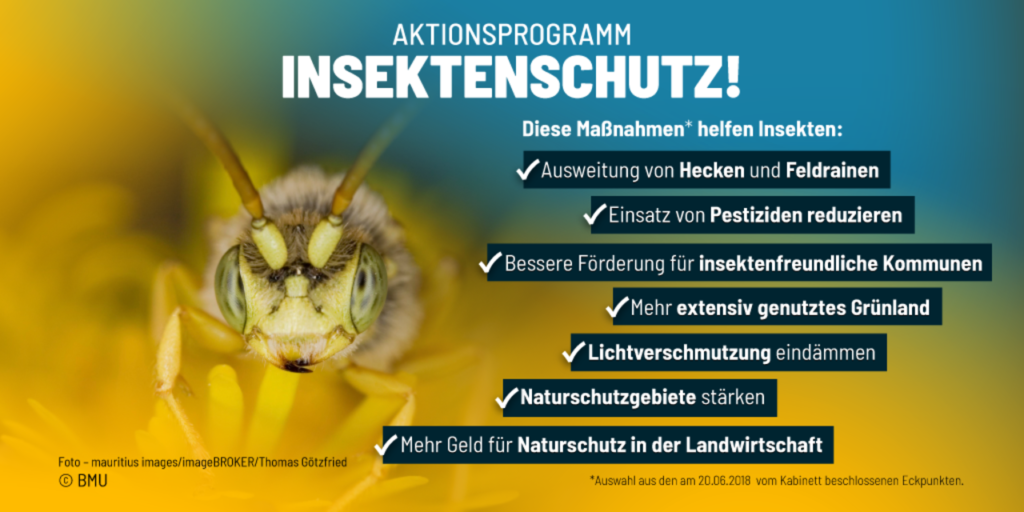 Federal Environment Minister Svenja Schulze: “We do not know all that about insect killing, but we know enough to act swiftly, a decision by the Cabinet  on these key points in the first 100 days of my term of office In the Federal Government was important, we now agree on the areas we will act to stop the insect killing, including a more restrictive approach to pesticides, not just glyphosate, and we need more diversity in the landscape Hedges and flowery meadows instead of monocultures are vital for insects, birds and many other animal species. ”

With the action program insect protection measures are to be taken in the following areas:

In addition, the action program should contribute to closing existing knowledge gaps on insect killing and to introduce a uniform nationwide insect monitoring. Also business associations and companies, research and education as well as civic actors up to the individual citizen are to be addressed, informed and encouraged to become active.

As part of the “Federal Biological Diversity Program”, the Federal Environment Ministry has today called for the submission of practical projects to promote insects and their biodiversity. For these projects, five million euros a year are provided. Over the next six to eight years, a total of 30 to 40 million euros from the BMU subsidy program will flow into insect protection.

Federal Environment Minister Schulze states: “Both the total amount of insects and the variety of insect species has declined dramatically in Germany over the past decades.” Insect killing threatens to bring nature out of balance. “Not only birds, bats and other animals disappear with the insects In the end, harming the insects also harms us humans: we lose also valuable services that insect provide to humans – from pollination, to natural pest control, water purification to the conservation of fertile soils.”

(thanks to Andrea Jechow, IGB Berlin, for letting us know)