In the past week we put some time and energy to review various ongoing initiatives (I say “we” referring to some folks I collaborate with).
At the end of this exercise, we came out with a schedule which will bring us in seven weeks to the Third Farma Valley Winter Fest, with an outlook to June 2019. 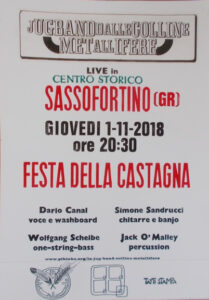 I don’t mean to elaborate too much. The first upcoming event, as far as I and other colleagues are concerned, is the first official live show by the Metalliferous Hills Jug Band at the Sassofortino Chestnut Fest, in Southern Tuscany. I am particularly glad because a cousin of mine from Ireland will be on stage.

For residents in Southern Tuscany, the  Sassofortino Chestnut Fest is one of the interesting and important events, animating their  territory out of the Summer season. For non-residents, this might look like yet another country-style joint. We invite you to come on the evening of Nov. 1, and we can decide together what it will be.

To start getting a feel for the upcoming season, you might want to review some of the past news from the pibinko.org blog, and take a peek to the calendar, which will be updated weekly through the end of the year.

Moving away from the daylight saving months, we move into a different phase…possibly nightlight saving?