If the Winter proved to be somewhat slow, Spring started to see various flowers blooming. The progression might get a little hectic, but if you have been following this blog in the past you should know things can get that pace at times.

At the beginning of April Francesco made the trip to Civitanova Marche, opening his lesson with something sounding like a standing ovation at the Academy Awards. The experiment described in the video “Let’s light up the stars” was taken up by the author of a book for children. I managed to finish the editing of the video of the mission to Sardinia from the previous August…but, most of all: we won!

We were contacted by the Municipality of Laives, in Alto Adige/South Tyrol. They informed us that we had been selected for one of the “passion awards” for the Seconda Luna contest.
The picture show us, the two youn environmental engineers, during the award ceremony. 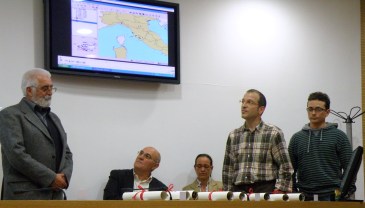 Somewhat, it seemed that the jury was bewildered by our application: I recall there were something like 925 people participating, from all over Italy, running for five prizes. However, for our project the organizers created an ad hoc category, initially not existing in the regulation: the prize for the “passion on science and technology”.
In a way, they were telling us that our project was interesting enough to deserve recognition, but they could not place it together with the other 924 passions (which included very diverse things, such as wind bottlers, farmers growing grapes upside down, and people who were going on foot along all of the Italian coastline).
Last, but not least, they gave us 2000 Euro, which we decided to invest in the continuation of the project.
You could easily say that I am biased, but, if the project we proposed would have felt like any project, why create a different category for it?

Summing it all up, we were getting very different responses to the solicitations we were sending…things were rolling.